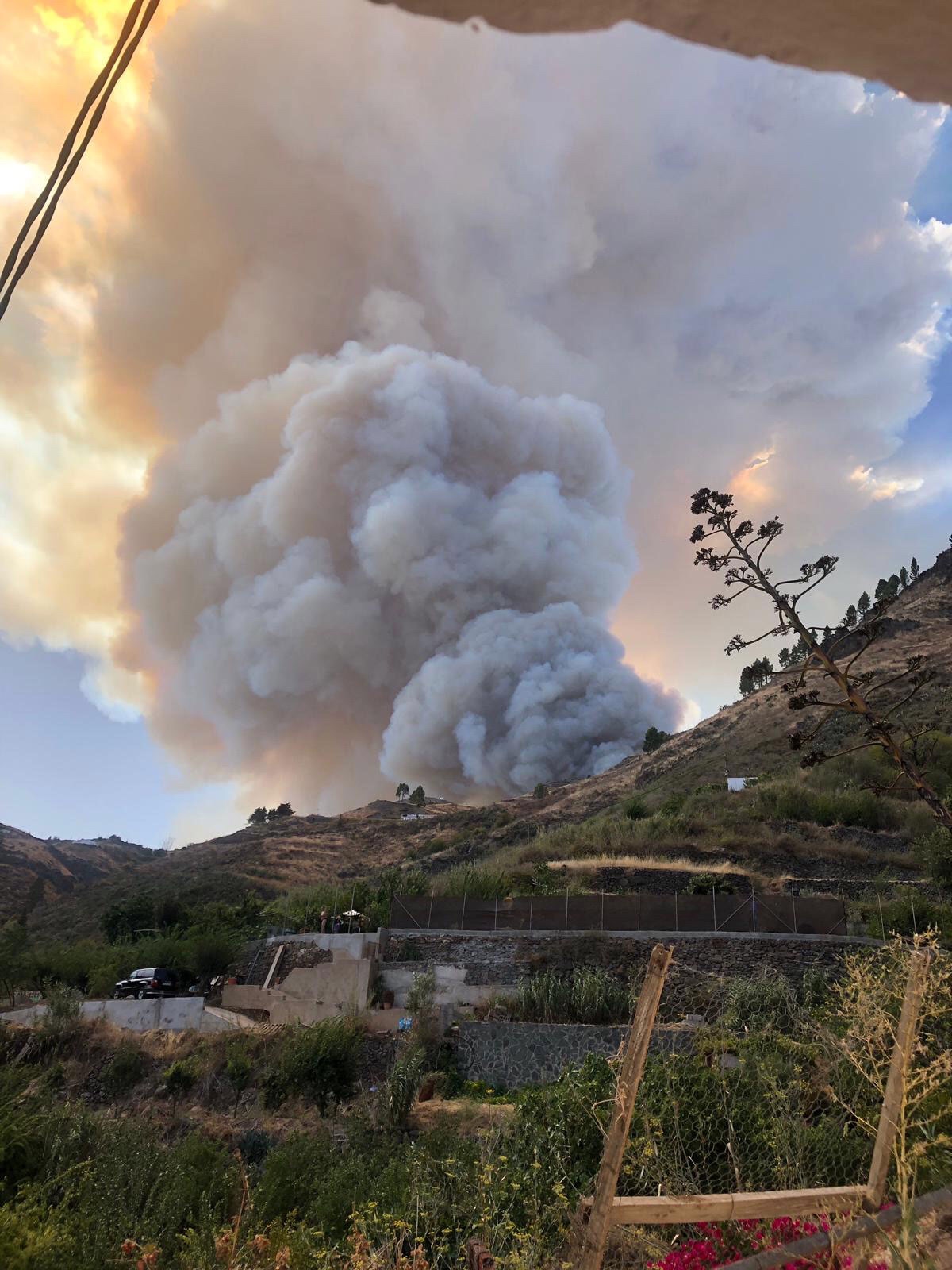 So, when we moved into this area we had various expectations about the place, for instance we knew there’d be bugs and that the caves would be humid. What we didn’t bargain for were the fires that are commonplace during the hot, summer months and that this year there would be one of the worst fires that the island had seen for years!

The first fire was pretty close to us but over the other side of the mountain. We’d been out for most of the day and when we headed home there were no signs of a fire, no smoke and nothing to concern us. To be honest we were quite blasé about the whole thing and slept like babies that night, although it hit home the next morning when we heard the news that the wind had changed during the night and blown the fire to Tejeda, an area just a bit further up the mountain than us. Thankfully the emergency services are used to these fires and they had it under control in just a couple of days.

Fast forward a week or so and we were enjoying trying out our outdoor pizza oven, (without much success it turned out!) I had just popped indoors to feed baby in the shade when Miguel came in and calmly told me there was a fire outside. My thoughts immediately went to the pizzas and I imagined that Miguel’s dad’s attempts had gone awry and had somehow caught light, however it was much worse than this! Miguel pointed up over the mountains behind our house and sure enough the sky was full of smoke and we could actually see flames creeping over the top. I thought ‘this is it!’ We had finally bought our dream home in the sun and it was about to be burnt down in a fire just a few weeks after we’d moved in! Miguel told me to start packing, the fire was close and we needed to be ready to leave at a moments notice. Leon was awake and could sense from our voices that something was wrong; I put on some proper shoes and tied on the soft fabric sling I carry Leon in and popped him inside, before gathering all our important documents and enough belongings for a couple of nights. We moved all our valuables into the furthest cave and Miguel watered the orchards and the land surrounding our house in case the fire really did spread this far.

After about an hour of this frenzied packing and preparing it looked like the fire had been controlled. The emergency helicopters had been flying over every few minutes to drop water on the fire and we could no longer see smoke so we sat down on our soaking wet terrace and finally ate the slightly soggy pizzas! Unfortunately over the next couple of hours the fire became visible again and around 8pm we decided that staying in the house with the risk of fire so close was not worth taking and we put our bags in the car and headed to our friends’ house in the capital, Las Palmas. Our neighbours got in touch early the next day to tell us that the whole area was evacuated by the police around 5am, with sirens and police hammering on the doors warning everyone to leave. This sounded super scary and I was glad we had made the call to evacuate ourselves a bit earlier.

We weren’t allowed to return to our house for the next week as the fire continued to rage and burnt everything in its path around the island. The fire services are incredible here and they were supported by fire teams from mainland Spain too who fought to control the fire and stop it from spreading further.

A week or so later and we experienced our third fire of the summer, and the closest by far! We were hiking up the mountain to the closest bar when Miguel suddenly stopped dead in his tracks and pointed ahead of us. A house opposite us was on fire and so was the surrounding land. The hot, dry summer meant that lots of the land was perfect tinder for fires and this one was spreading quickly across the land. We continued up to the bar (of course!) and gathered with our neighbours as the helicopters flew over and started to put out this fire. They worked fast and in no time at all they had this fire under control.

Apparently this summer has been the worst for fires and hopefully we won’t experience anything as bad over the coming years. Thankfully our neighbours who have lived in the area for many years assure us that our area has never been hit badly by fire due to all the cactus and succulents that grow here, so we hope that continues to be the case in the future!